Washington, DC, August 28, 2019 – The Association of American Publishers today announced that participating publisher revenue reached nearly $6 billion for the first six months of 2019, an increase of 6.9% over the first six months of last year. The reported revenue, which was featured in a StatShot report, reflects all tracked categories, which include Trade (consumer publications), PreK-12 Instructional Materials, Higher Education Course Materials, Professional Publishing and University Presses. 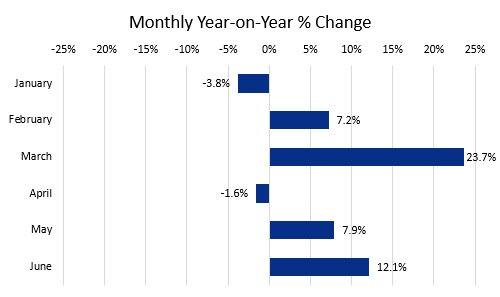 For the first six months of 2019, publisher net revenue for Trade, including sales to bookstores, wholesalers, direct to consumer, online retailers, etc., was up 3.8% as compared to the same period last year, reaching $3.5 billion. Religious presses led in revenue growth with an 11.4% increase over the same period last year, and now represent 9.5% of all reported Trade revenue. 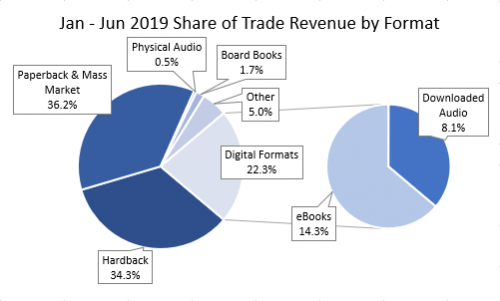 During the first six months of 2019 total revenues for participating education and scholarly publishers, which include Professional books, K-12 Instructional Materials, Higher Education, and University Presses, saw an uptick, reaching $2,520.0 million and increasing 11.6% compared with the same period last year. The largest growth was attributable to K-12 sector.

Publisher net revenue, including sales to bookstores, wholesalers, direct to consumer, online retailers, etc., is tracked monthly by the Association of American Publishers (AAP) and includes revenue from about 1,360 publishers, with participation subject to change over time.

The StatShot Annual, Higher Education Annual, and PreK-12 Annual reports for calendar year 2018 are available for purchase. For additional information about these reports, email Syreeta Swann at sswann@publishers.org.

StatShot reports are designed to give an up-to-date snapshot of the publishing industry using the best data currently available. The reports reflect participants’ most recent reported revenue for current and previous periods, enabling readers to compare revenue on a year-to-year basis within a given StatShot report. For example, the current report indicates that, based on current data, publishing revenues were $6 billion for the first six months of 2019, an increase of 6.9% over the first six months of last year.

It is not, however, possible to make apples-to-apples comparisons to StatShot reports issued in previous years because: a) The number of StatShot participants fluctuates over time, with the pool of participants growing or shrinking in each report. This year’s 6-month report, for example, drew data from more publishers than last years, and b) It is a common accounting practices for businesses, including publishers, to restate revenue numbers based on updated information. If, for example, a business learns that its revenues were greater in a given year than its reports indicated, it will restate the revenues in subsequent reports, providing information that is more up-to-date and accurate. This year’s report on revenues for the first six months of 2019 reflects some restatements for 2018 revenues.

AAP | The Association of American Publishers represents the leading book, journal, and education publishers in the United States on matters of law and policy, advocating for outcomes that incentivize the publication of creative expression, professional content, and learning solutions. As essential participants in local markets and the global economy, our members invest in and inspire the exchange of ideas, transforming the world we live in one word at a time. Find us online at newsroom.publishers.org or on twitter at @AmericanPublish.