Revenue for Trade Books grew by 3.0%, with revenue increases in both Adult Books and Childrens/YA books over 2016.

“What a testament to the importance of the publishing industry,” said Maria A. Pallante, President and CEO, Association of American Publishers. “Whatever the category, format or distribution platform, books remain a constant in the marketplace and in our lives.”

Below is a chart that shows the market share of various Trade Book formats for the first half of the year from the past six years. Print books - including paperback, mass market and hardback - account for more than 70% of publisher revenue of trade books. Audiobooks more than doubled their share since 2011. 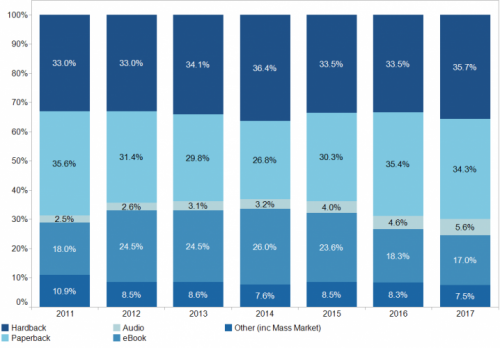 Publisher net revenue is tracked monthly by the Association of American Publishers (AAP) and includes sales data from more than 1,200 publishers (#AAPStats). Figures represent publishers’ net revenue for the U.S. (i.e. what publishers sell to bookstores, direct to consumer, online venues, etc.), and are not retailer/consumer sales figures.

The Association of American Publishers (AAP) represents more than 300 book and journal publishers in the United States on matters of law and policy. Find us online at www.newsroom.publishers.org or on twitter at @AmericanPublish.